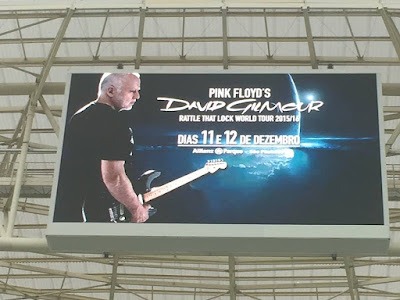 When lighting genius Marc Brickman says of last night’s concert “that was David’s best concert ever” you know that something very special took place. The atmosphere in the stadium was crackling with anticipation as the 45,000 chanted “David Gilmour”, led by the ‘standing room’ only fans on the pitch.

The afternoon thunderstorms had cleared and everyone was ready to enjoy a concert that they had waited many years to witness. The sea of iPhone lights twinkled around the stadium as the band began the opening ‘5 A.M.’. Between songs the chanting would start up, and at one point, just before ‘A Boat Lies Waiting’ David had to gently ask for some quiet.

Last night ‘Money’, ‘Fat Old Sun’ and ‘Comfortably Numb’ had rarely been played better, the extended improvised soloing saw David’s playing scale the heights, supported superbly by the band, who all seemed to be inspired by the wonderful audience. David told them: “How beautifully you are singing”. As the band leave São Paulo for the next leg of the tour, they will take with them great memories of both concerts, not least the powerful sound of over 45,000 voices accompanying them.

Here’s what was played last night:

First set: 5 A.M., Rattle That Lock, Faces Of Stone, Wish You Were Here, A Boat Lies Waiting, The Blue, Money, Us And Them, In Any Tongue, High Hopes.
Second set: Astronomy Domine, Shine On You Crazy Diamond, Fat Old Sun, Coming Back To Life, On An Island, The Girl In The Yellow Dress, Today, Sorrow, Run Like Hell
Encore: Time / Breathe (reprise), Comfortably Numb.